The journey on the “4” rollercoaster was a helluva ride.  You can’t find this ride at Six Flags, Dorney Park or on the MTA however.  It was at the Roseland Ballroom for four nights only starring the one and only, Beyonce. 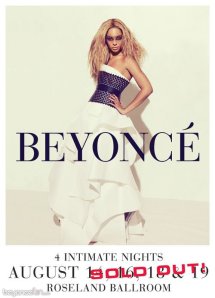 When I arrived with my Mommy on the line after 5pm, (yes my Mommay wanted to go to) we were standing halfway down 53rd Street and the entrance was on 52nd.  After lining up behind hundreds of fans three hours before doors open, I was curious to meet the person(s) who are the lucky first on line. 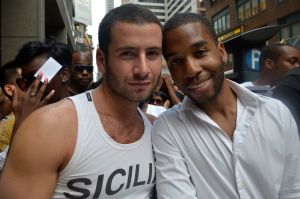 (Vincent Paradiso (left) and Richard Glover were on the line since 3 A.M and took turns getting meals and using the bathroom.)

The two early birds strategically came up with the right time to arrive.  “I came here yesterday (Thursday) to scope out the scene and asked the first people on the line what time they arrived,” Vincent said.  “When they said 6 A.M. I figured we’d step it up a notch and come at 3.”

They weren’t alone for too long on the line.  In fact, there was a small group of six who were camped out in front of the concert hall before 6 A.M., a time when the Roseland employees were probably just getting out of their beds to prepare for the madness they have endured since last Sunday at Beyonce’s first show.

Tyrone Thomas and Austin Crawford, drove 12 hours from Indianapolis and hopped right on line at 4 A.M.  This wasn’t their first time going the distance for Ms. Bey, the duo also drove to Chicago or a past show.  “She is a woman of so much class,” Tyrone said.  “She empowers men and women and gives 100% in everything she does.”  What was their must have item for the road? “All of Beyonce’s albums!” Austin yelled. Duh.  I should’ve known that answer.

(Austin (left) and Tyrone still smiling despite being on their feet for over 12 hours waiting on line. And they had about eight more hours left of standing to do!)

I walked up and down the line and chatted with some of the fans.  This was my first Beyonce concert, so meeting loyal fans like 15-year old Janiece Lawrence of Long Island really awed me.  This was Janiece’s 5th Beyonce show and attended her first concert with the “King B” at age nine.  When I asked her what makes her keep coming back, she quickly responded without hesitation and excitedly, “Have you seen her perform?!”  Ummm, no.  Guess I was really in for a treat!! 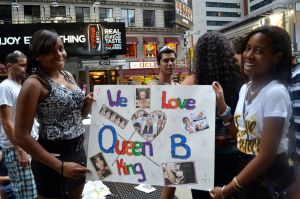 (Janiece (right) with her friend holds up a homemade sign of their idol that they say took almost nine hours to complete.)

Some people came more prepared than others as they lounged around during the long wait.

Just as the anticipation was growing as we neared the time of the doors opening, the sky began to roar ferociously with thunder and the lightning was brightening the sky.  It was about to rain.  Not Carl Thomas’ “Summer Rain” either.  It was Halle Berry’s Storm weather forecast!!!

The rain and wind got so bad I had to put away my camera to protect it.  Then the crowd and wind got so bad as everyone rushed to the entrance to get inside for cover.  I was afraid things were going to get ugly.  The crowd chanted “LET US IN!,” but we still weren’t allowed in the venue until the scheduled 8 P.M.  I hoped the “Lucky 6” who stood in line since daybreak didn’t get skipped during the mimi melee as I read angry tweets of people who arrived early ended up waiting in vain for a good spot in the front.

Despite the complaints of being outside in the rain, once everyone was inside, all was forgotten.  It was time to see the King.  No, wait.  She wasn’t performing until 10.  Another two hour wait inside, except now there was no room for chairs…nor oxygen.

Thank goodness the legendary DJ D-Nice, who was killing it on the 1’s and 2’s.  I was dancing to keep the blood flowing up and down my legs.  That standing room only game is NO JOKE!!

I have never been so excited for a time to arrive other than midnight on my birthday and when Pinkberry opens.  It was 10 P.M. Do you know where your favorite superstar is?  Well for many, she was finally hitting the stage to give us the best 90 minutes of our lives.

She started off with an appetizer telling us her fairy-tale story of how she was nine with a voice and a dream trying to get a record deal to how she became one of the best-selling music artists of all time.  She sang snippets of her hits with Destiny’s Child and her first three albums to take us down memory lane.  She followed up with her explanation of her fascination of the number 4 which lead into the main course of the evening.  From birthdays to her wedding anniversary, she is surrounded by the number.

She sang more than half of her latest album, 4.  I was trying to sneak peeks of her hubby Jay-Z in VIP to see his facial reactions when she sang songs clearly dedicated to him like, “1+1,” “Countdown,” and “Rather Die Young.”  He was bopping his head real hard and smiling closed mouth.  I really think he tears up internally every time she sings those ballads though.  I hear the love in her voice and when I squinted to look 150 yards away to where he was sitting, I saw the love in his eyes too.  Magical.

Fave moment: Her extended ending to “Love On Top.”  She had to take a breather after that one.

Unfortunately, there were no surprise guests on stage or other big name celebrities in the audience. 😦 Womp.

Ultimately, despite the terential downpour and occasional whining from my mother, we had fun.  However, we both agreed we can’t do another concert without having an assigned seat.

Finally got the “King B” experience!!

Another day back n …Midtown.

More photos!!  Do you see yourself?